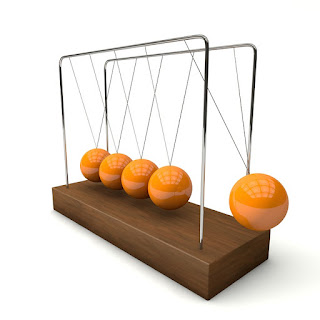 First sight the eight physical systems :
All of these systems are simple harmonic oscillators which, when slightly disturbed from their equilibrium or rest postion, will oscillate with simple harmonic motion. This is the most fundamental vibration of a single particle or one-dimensional system. A small displacement $x$ from its equilibrium position sets up a restoring force which is proportional to $x$ acting in a direction towards the equilibrium position. 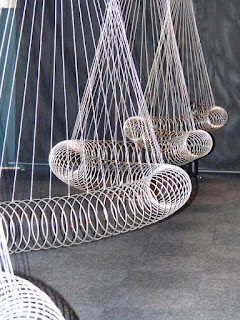 Thus, this restoring force $F$ may be written
\[F=-sx\]
where $s$, the constant of proportionality, is called the stiffness and the negative sign shows that the force is acting against the direction of increasing displacement and back towards the equilibrium position. A constant value of the stiffness restricts the displacement $x$ to small values (this is Hooke’s Law of Elasticity). The stiffness s is obviously the restoring force per unit distance (or displacement) and has the dimensions \[\frac{force}{distance}=\frac{MLT^{-2}}{L}\]
The equation of motion of such a disturbed system is given by the dynamic balance between the forces acting on the system, which by Newton’s Law is \[mass\,times\,acceleration=restoring\,force\]
or \[m\ddot{x}=-sx\]
where the acceleration \[\ddot{x}=\frac{d^{2}x}{dt^{2}}\]
This gives \[m\ddot{x}+sx=0\]

However, when we solve the equation of motion we shall find that the behaviour of $x$ with time has a sinusoidal or cosinusoidal dependence, and it will prove more appropriate to consider, not $\nu$, but the angular frequency $\omega$ = $2\pi\nu$ so that the period \[T=\frac{1}{\nu}=2\pi \sqrt{\frac{m}{s}}\]